What has been brought up as part of social system and used as a political tool already has made its consequence. Now it ripened and exposed itself. That is religion-ism: the Islamism and Mullah-ism. We already showed that bourgeoisie religious education has been made compulsory up to secondary level and all types of Madrasha education including Kowmi ones has been kept continuing. Now the Mullah have come up with 13 point demand of imposing blasphemy rule including giving punishment to what they say ‘Atheist’ bloggers, inclusion of name of Allah and Mohammad in constitution, making religious education compulsory up to higher secondary level, annulment of women policy and destroy all the

sculptures of the country. Already, in big gathering in Dhaka, as a manifestation of their anti women Islamist line, Mullah has beaten Nadia Sharmin, a female media activist.

Many of the middle and higher class intellectuals have expressed their opinion that if a single of the 13 points of Mullah is materialized, Bangladesh will become a middle age fundamentalist state. But the Awami League government wants to consider the demands of the Mullah. BNP is also the same. And the Ershad, the fraud, since some days have started religious chorus with the Mullah.

Which irresistible desire led Hasina Khaleda and Ershad to be subservient to the Mullah?

That is the desire for power; to carry exploitation, corruption and plunder by keeping or taking power.

After squeezing and decaying Shahbagh movement through Imran and some Awami cadres, the Awami League in competition with its competitor BNP and Jamat, raised Hefazat-e- Islami named a ‘pure’ Islamist Mullah-ist party against what they say ‘Atheist Bloggers’. So, government 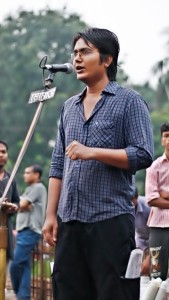 arrested Asif Mahiuddin and three other bloggers in charge of defaming Allah and Mohammad.

On which point government is afraid of bloggers? They are afraid that there may be some radicals inside the bloggers who naturally may seek revolutionary transformation of society, which in turn will be threat to their exploitation and plunder. Rather it will be better for them to drag society backward. This is why, in order to safeguard the Mullah, they even resisted their own cadres by Police which resulted several Awami League cadres being killed.

They want to use the Islamist religion-ists to gain power in the next election. And the US imperialists, British imperialists and the Middle Eastern Arab expansionists became the biggest propagandists of Islamists. They want a Taliban type government, so that they may establish full colony by breaking out war. So, they may help the Islamists to swallow everything.

Farhad Mazhar is a fraud intellectual of the Islamists. He introduces himself as progressive while he is the biggest enemy of progress. This wicked apologist of Islamism has mentioned the gathering of Mullah as the biggest rising in contemporary Asia. Imperialists have appointed him to transform Bangladesh to dark sanctuary so they may materialize their black agenda.

Let us see what the Islamists want to establish:

In short these are some basic program of the Islamists.

Why is it fascism?

Today, capitalism being in the last stage, the stage of imperialism, is on death bed. It has no more possibility of development. It has no ideology except making hoax.  Islamism is a hoax. By terrorizing uneducated and backward people with super naturalism and spiritualism, making them greedy for having heaven in after death life, they want to establish unjust rule and exploitation of the rich class.

Today, those who want a progressive society must expose all sorts of fascism including democratic autocracy of Hasina and Khaleda, Islamism of the religion-ists, military autocracy of the military bureaucracy to people, so that people may be able to struggle to change their fate.

Develop uncompromising struggle against all sorts of exploitation and their ideologies!