Managing or corresponding to the transformation of reality? A major question of Maoism 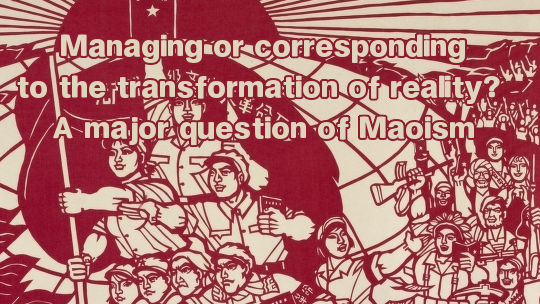 The question raised here is the one of the nature of dialectical materialism. Either reality exists “outside us” and, in a way, we can choose to transform it, or the contradiction is inside reality and we are a part of reality, transforming ourselves in an adequate manner.

This is a very important question, the basic question of the nature of materialism, of reality. And it plays a very important role also – or even a central role – nowadays in the debates in the International Communist Movement about Maoism.

To understand that we need to see the main ideological proposals that exist. We can see that these two conceptions are expressed and are the source of the main differences.

There are nowadays four main Maoist conceptions. Here is a short presentation.

This conception is that revolution is not something coming “mechanically” from reality, but the best choice of humanity. Communism is the best “option” for a rational thought. There is no scientific affirmation, only a will, a choice, an option. Communism won’t be established unless humanity “chooses” it.

b) The Co-RIM second generation conception

The conception put forward by these organizations is that Maoism is the science of revolution. Nevertheless, Maoism gives mainly the main indications; practical flexibility is needed because of the numerous situations. Therefore, good choices must be made, with a flexible mind and there is no place for dogmatic views.

Some organizations rejected clearly the avakianist conception as idealist and the Co-RIM second generation as opportunist.

Therefore, they produced anti-Centrist calls, against the Nepali betrayal at the beginning, which brought them in ideological conflict with the organizations defending the “flexible approach”.

The understanding of Maoism of these organizations is quite different, but the common basis is that Maoism is the science of revolution with principles that are not “flexible”.

According to Gonzalo, communism is unavoidable and therefore thoughts are produced, synthesizing a national reality with dialectical materialism and being a guiding light for the revolutionaries. In this sense, a thought is all-powerful.

But there can be and there are two interpretations of this all-powerful feature.

a) either this thought is all powerful because it shows the way and gives the correct methods; then following the thought means victory;

The position of the MPP and its consequence

It is very clear that the Peru People’s Movement, generated organism of the Communist Party of Peru (PCP) for the work abroad, upholds the first conception mentioned about the Gonzalo conception (the thought shows the way and gives the correct methods).

For the MPP, Maoism must be “put in command”, it is spoken of “imposing Maoism” ; some organizations near from the MPP call to “accelerate” the constitution or reconstitution of the Party in their own country, and there is also the call for two-line struggle.

The CPMLM of France does not accept this conception. Two-line struggle is not a “choice” but a practice which is made when in the reality itself the conditions exist for it. It is not possible neither to “accelerate” or “brake” the revolution; reality is one and no “choice” is possible.

The consequence of this difference can be seen in the attitude about Nepali revisionism. When Gonzalo was captured by the reactionary Peruvian army, the PCP considered itself as the red fraction within the RIM.

The MPP maintained this in the years following. The MPP spoke for long of “comrade Avakian”, trying not to criticize him openly directly, and the same happened with “comrade Prachanda”. When in 2007, for the CPMLM of France, Prachanda was already considered openly serving modern revisionism and the line of an imperialist peace agreement, the MPP criticizes him but was still speaking of “comrade Prachanda”.

The reason for the position of the MPP, that can be summed up with “no open criticism until the other decides a split”, is a direct product of the subjectivist conception of “managing matter”.

The MPP tried to “manage” the reality of the RIM, whereas the inner contradiction of the RIM was absolutely not considered, thus permitting the avakianists to organize and then the centrists to organize.

The position of the CE-PCR and its consequence

In the last weeks, the PCE-CR – Reconstruction Committee of the Communist Party of Ecuador called for two line struggle and criticized sharply some organizations of what we called here the intermediary conception.

The reason for that is that the PCE-CR seems to move in the same subjectivist conception of “managing reality”. Its call for “two line struggle” exists as nothing would have happened in the RIM those last 15 years.

It is as the RIM would exist, with problems – the PCE-CR and the MPP certainly not agree with Centrism – but that the anti-centrists would be “outsiders”, with an ideological level “under” the value of the RIM.

Therefore, with such a vision, the PCE-CR can come and make a subjectivist call of two line struggle with its own criteria – even if the criteria are of the greatest value, they do not correspond to the question of the moment, they are not articulated politically.

The positive example of the first of may 2009

When there was the betrayal of the Nepali revolution, in 2005-2006, few organizations explained it openly and express that it was a terrible revisionist danger. Among them, there was the Communist Worker Union (Marxist Leninist Maoist) of Colombia.

On the first of May 2009, the joint document called “The Imperialist Capitalism is in Crisis – Long Live Socialism and Communism!”, signed by the Union Obrera Comunista (MLM) – [Colombia], the Marxist Leninist Maoist Communist Party – [France] and the Communist Party of Ecuador – Red Sun expressed in a correct manner:

“The world is mature for the revolution! (…) And not only to resist, also to remove with the revolution all the relations of oppression and exploitation, as the intensification of social contradictions puts on the agenda the question of political power and revolutionary violence of the masses, and its resolution by the People’s War which – today – is advancing in a victorious way in countries like India, is re-appearing in Peru, and is getting ready in others, in agreement with the level of organization of the proletariat’s party (…).

And with this reality showing a luminous prospect, the proletarians in the world must know a bitter truth : in Nepal, where the victorious advance of People’s War and the working and peasant masses were about to conquer power in all the country, the direction of the Communist Party of Nepal (Maoist), signed a peace agreement with the bourgeoisie and the landlords with the support of the imperialists, dismantling people’s power in the bases of support and confining the People’s Liberation Army under the supervision of the UN.

A renunciation of the revolutionary path which constitutes in the facts a treason of the revolution of New Democracy in Nepal and the World Proletarian Revolution, producing in the International Communist Movement a great confusion to the point that the RIM – Revolutionary Internationalist Movement remained tied up and quiet confronted to treason and to phenomenons which, as the crisis, are of decisive importance in the world situation and the international struggle of the proletariat (…).

Long live the red First of May, International Day of the Working Class!

The Imperialist Capitalism is in crisis – Long live Socialism and Communism!

Down with the Revisionist Treason in Nepal!

Go forward in the Construction of Communist Parties and in the direction of New International Conference of the Marxist-Leninist-Maoists!

Was this correct? Indeed – it was not “managing” reality, but corresponding to it. It was not subjectivism or will in command, it was a synthetic understanding of reality, and an expression of reality.

Managing or corresponding to the transformation of reality? A major question of Maoism

Communism is unavoidable, because matter is eternal and obeys to the dialectical law of transformation. Communists are humans corresponding ideologically to the new, being a part of the tendency triumphing over the past.

From this conception come the theory of reflection, the conception of the thought, socialist realism in the art (i.e. typical representation corresponding to the new reality being born, assuming the heritage of the past).

Mao Zedong, in explaining that nothing is indivisible, permitted to understand this in the most perfect way.

Mao Zedong permitted us to go over the mistakes of our great comrade Stalin, that moved towards the idealist approach of changing matter from “outside”, forgetting the inner contradiction (mistakes producing the “Great Plan for the Transformation of Nature” in the 1948, opening the way to idealism and revisionism).

The Great Cultural Proletarian Revolution (GPCR) was launched not only against the counter revolutionaries, it was also there to generalize the conception that nothing is indivisible.

All over the world, thoughts were produced, following the call of the GPCR: Gonzalo in Peru, Akram Yari in Afghanistan, Siraj Sikder in Bangladesh, Ibrahim Kaypakkaya in Turkey…

And these thoughts were not an idealist “Mao Zedong thought” pretending to change reality with the revolutionary “will”, there were the best product of Mao Zedong’s understanding of Marxism-Leninism, brought to a new stage.

It was not a question of “managing” reality, but to be conform to it! That is why subjectivism must be rejected; even the best revolutionary “will” converges with opportunism because it is not able to follow reality and its incessant transformation.

Adequacy must be our great concern, we must always correspond to the transformation of reality.