FIGHT OR DEFEND CHAVEZ: FIGHT BETWEEN MARXISM AND REVISIONISM 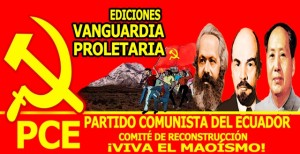 “Within the party and opposition are constantly struggle between different ideas. This reflects, in the Party of contradictions between classes and between the new and the old in society. If the Party had no contradictions or ideological struggles to resolve them, the Party’s life would come to an end. “MAO TSE-TUNG

The struggle against the fascist regime of Chavez – Venezuela Maduro has moved directly to the communist movement and the international revolutionary, is a struggle between Marxism and revisionism.

In this fight the communists and revolutionaries can not give an inch, because that defends Chavez from hoxhismo positions, Trotskyism, anarchism, prachandism, etc., Is nothing strange or disturbing, but some calling themselves Maoists claim to defend the fascist process – corporate Chavez – Venezuela Maduro allegedly from positions “Maoists” who can not afford it, ie we must fight the new revisionism, which is word and opportunist Maoist in fact.

In order to stimulate further discussion and decision-position, we propose the following as part of the two-line struggle within the MCI, struggle with maturity proletarian be assumed:

1.-Some parties and organizations are arguing that the government is “Yankee imperialism.” What supports this position?, Simply demagogic statements of the Venezuelan regime, but the practical reality is quite different. Venezuela is the third country that supplies oil to the U.S. with 35 million barrels per month, after Canada and Saudi Arabia. Venezuela’s external debt with China and Russia over the past decade and a half amounted to 135 billion dollars. In 2012, Venezuela imported goods from the U.S. in the amount of 17.6 billion dollars, which accounts for 43% of imports from that country. Under these conditions the main trading partner ES VENEZUELA Yankee imperialism itself. Simultaneously Chavez – Maduro are serving the U.S. policy as when Chávez said: “From the point of view of realpolitik, if I were American, I would vote for Obama. And I think if Obama was Windward or district of Caracas, vote for Chavez. I’m sure. ” (CNNEspañol.com, 30/09/2012). Simultaneously Chavez has publicly renounced Marxism-Leninism (http://www.youtube.com/watch?v=2bIl4Uii5GI). As we can see the alleged “nationalism” and “anti-imperialism” of Chavez – Maduro is a lie the size of the Himalayas. To better understand this point we must take what we learn from Comrade Stalin:”Imperialism is the export of capital to the sources of raw materials, the furious struggle for possession monopoly of these sources, the struggle for a redivision of the world and distributed, with particular ferocity struggle waged by the new financial groups and new powers, seeking “a place in the sun” against the old groups and the old powers, tenaciously clinging to their conquests. “

2.-The Maoist Communist Party of Italy said on Chavez: “Chavez is a fighter against U.S. imperialism, in defense of the national independence of Venezuela in the context of the struggle in Latin America.” (Http://proletaricomunisti. blogspot.it/2013/03/pc-7-marzo-in-morte-di-chavez.html). This is a totally wrong approach, since it ignores the fascist character and pro-imperialist government of Chavez – Mature and drag the oppressed masses as caboose of the bureaucratic bourgeoisie. We wonder: with such low political ideological PCM Italy aims to lead the reconstruction of MRI?, Did you search for a “new” MRI single facade but deep with deviations similar to those of Avakian and Prachanda?. If the PCM Italy persists in these deviations, and other as-Nepal is simply revolutionary burying any attempt to reconstruct the MRI.

3.-The Communist Party of the Philippines issued a statement of support for Chavez deep. This really is worrying as it unfolds Philippine War that if one does not have solid proletarian leadership simply will not succeed. Our Party has been warning for more than one year a number of deviations from a sector of the PCF as having excellent relations with ICMLPO hoxhista, fascists supporting processes such as Chavez – Maduro in Venezuela, support the Cuban revisionism, the FARC armed revisionism, among others. It’s not about whether we like it or not, is the reality and we must take a stand. At this rate the Filipino revolutionary process runs the serious risk of becoming another Nepal, dogmatism is not a matter of revolutionary science of Marxism-Leninism-Maoism. Inclusive imperialism can play those cards: What if in the future in the Philippines imperialism and the ruling classes counterrevolutionary strategy adopted as the introduction of a system “reformist” Chavez style and amid that peace agreements? The risk of a repeat of a new Nepal would be enormous. The Central Committee of the PCF and the whole party should seriously discuss these sensitive and complex issues.

4.-From the red line of Maoism, a handful of communist parties and revolutionary organizations have spoken out in open combat characterizing Chávez regime as fascist and pawn of imperialism, and for the new type of democratic revolution in Venezuela are not pronouncements only now are part of the strategic line of such revolutionary parties. In that direction have ruled the Communist Party Marxist-Leninist-Maoist of France, the Communist Party of Peru, the Communist Party of Ecuador Sol – Red, the Organization of Workers of Afghanistan Marxist-Leninist-Maoist, mainly Maoist Communist Party of Ecuador – Reconstruction Committee and other organizations in Turkey and Bangladesh. We welcome this important grouping of the red line, that while it is not organic ideological trend is being constituted international revolutionary Maoists on important and topical issues of movimieto communist class struggle. “Marx’s theory made clear the real task of a revolutionary socialist party: not invent plans restructuring of society nor to question the preaching to the capitalists and their hangers on the need to improve the situation of the workers, nor weave conspiracies, but to organize the class struggle of the proletariat and lead this struggle, which aims to end the conquest of political power by the proletariat and the socialist organization of society. “LENIN

5.-Several international blogs are publishing papers on behalf of the fascist regime of Chavez in the most recalcitrant of them is the “class hatred” of Spain. These characters have definitely removed the mask, as if until a couple of months were shown as the most “radical” now speak openly in favor of Chavez and his government in the same ideological-political line and hoxhismoprachandism is that pure revisionism and reformism. We note that this blog defends a black line in the MCI in many ways and one of them is just supporting the fascist Chavez, promoting divisiveness between international organizations, leading to victimize suspuestos then-nonexistent attacks against them. They pretend to be the champions of the struggle against centrism, but are ultracentristas Chavez defenders. All this happens by denying the thesis of bureaucratic capitalism, the two-line struggle, the accumulated history of MRI, of the fundamental teachings of PCP and mainly because your blog is not supported by any practical work of the proletarian revolution in Spain, but seek to opportunistically trade wars that occur thousands of miles away. Continue insulting and slandering the MCI because less time will stay longer completely alone and adrift ideological aimless until the final capitulation.

6.-We call the set of MCI rule in this debate has to take place openly and sustain his political arguments. This is in no way a Byzantine or abstract discussion, contrary has profound practical consequences. In this way we propose to fight those positions revisionists and reformists posed as great “works” that Chavez has decreased poverty percentage or certain nationalized oil companies, etc.. Since when do the Communists fight for “reducing” poverty in the framework of the capitalist-imperialist?, Do nationalizations in a government of the bourgeoisie that benefit the people?, Does a leader becomes bourgeois “revolutionary” by uttering the few speeches against the U.S. and the “oligarchy”? In turn we firmly combat those revisionist positions that seek to merge Marxism with bolivarianismo which is very reactionary. The great Karl Marx and in life ruled against the bourgeois leader Simon Bolivar and his delusions Bonapartist (http://www.marxists.org/espanol/me/1850s/58-boliv.htm). The Bolivarian revolution is a bourgeois reactionary defending current bureaucratic capitalism in the countries of Latin America and is deeply hostile to scientific communism. So the Bolivarian are, directly or indirectly, enemies of Marxism. The Communists we live and we activate in Ecuador, Peru, Brazil and other countries with fascist regimes Venezuelan government partners, we should be clear these problems to avoid falling into the traps of imperialism, reaction and revisionism.