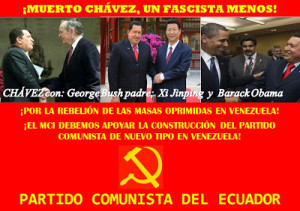 With the death of Hugo Chavez is slowly winds down a specific period of bureaucratic capitalism in Venezuela, who clothed forms and corporate fascists. His successor Nicolas Maduro will try to keep the project going, but it will not last long. With the government of Hugo Chavez, the big bourgeoisie and imperialism, bureaucratic faction, managed to stop for about two decades the struggle of the masses in Venezuela after the violent struggles of the “Caracazo” in the 90s of last century. That is, managed to conjure the rebellion of the poor masses waiting to happen in this country in the late twentieth century.

Beyond speech “nationalist” and “revolutionary” Chavez, how practice what changes have taken place in Venezuela? None of transcendence. This country remains the main supplier of raw materials such as oil for the imperialist countries including the U.S. itself. Venezuela does not have high-tech heavy industries as property of the people, only automotive assembly, light products, medicines, etc., While China and Russia have made loans for about 135 billion dollars to support the old state Venezuelan bourgeois-landlord, that is still a semi-colonial country. In terms of the contradictions in the field, Venezuela is precisely one of the countries with the highest concentration of land ownership, with large farms that grow to tens of thousands of hectares while there are millions of poor farmers with little or no land land which are lured with the crumbs of state missions, the semi-feudal system is intact. Specifically, Chavez and his government represent the counter-revolution, fascism and subservience to imperialism, beyond the speeches “nationalists” and delivering gifts to the poor internationally fulfilled the role of supporting other Fascist governments like that of Rafael Correa in Ecuador, the revisionists Castro brothers in Cuba and others.

The death of Hugo Chavez and the gradual termination of fascist project are left unmasked in the eyes of the masses, as happened before, in the twentieth century, with the fascist governments and corporate bureaucratic bourgeoisie Velasco Alvarado in Peru ( 60-70 decades), Juan Domingo Peron in Argentina (50), Rodriguez Lara in Ecuador (70) and others, who after completing their periods completely, the people realized the great scam which had victims because in practice remained poor and the rich were richer. And of course, the great deception told – when not!-With the help of revisionism and reformism.

On the other hand, the death of Hugo Chavez, weakens the bureaucratic bourgeoisies project in the region since the oil boom of Venezuela held to Cuba and other countries in turn was one of the pillars of the “XXI century socialism” that is “socialism” desired by imperialism, ie bourgeois reformism flavored with pure fascism and corporatism.

The proletariat and the oppressed peoples, communists and revolutionaries have no candle in this burial bourgeois, we have nothing to mourn or plunging into mourning. That cry Venezuelan bureaucratic bourgeoisie by the death of their chieftain, cry fascist governments Correa and EvoHumala by the departure of his partner, who mourn the American and Chinese oil investors by the departure of his business partner, cry reformists, revisionists who weep as PCMLE hoxhistas, or the pseudo-Maoist Echazú in Bolivia or class hatred in Spain, cry the unwary and naive, confused and aimless … because the people on the hill we see how to contribute to a revolution in Venezuela.

What Venezuela needs revolution? The real revolution in this country is one that confiscates large companies, banks and factories of the big bourgeoisie and put them in direct administration by the councils of workers, who confiscate large estates and distributed free among the poor peasants under the banner ” land to the tiller “that breaks radically with imperialist oppression, both the U.S., such as China, Russia or any other country that simultaneously imperialist and industrialize the country, ie the New Democratic revolution under proletarian leadership, transforming Venezuela from a semi-colonial and semi-feudal country to an independent, industrialized, prosperous, democratic culture and a large mass in towards socialism and communism.

Imperialism, reaction and revisionism, continue to use the figure of Hugo Chavez as long as they can monitor confusing and dividing the masses of people in Latin America, as long as allowed stop and derail the independent struggle of the masses and especially as long as allowed conjure the rebellion of the oppressed, but gradually large sections of masses is waking from this long sleep, and in that way, the Chavez government figure and be forgotten, as a simple reminder of the many scams over policies which have been a victim of the people and should no longer fall back, then, come the time of the real revolutionaries, the communist party Maoist, that of wars in Latin America and the entire world due to the bright and golden communism.