People, who are objects of intrigue 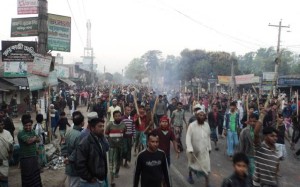 Constant suffering is being created in people’s daily life through killing, looting, vandalizing in the name of religion or biting each other in greed for power. Transport and communication, business and industries are collapsed. Common laboring people are not being able to go to work.

Because war criminal tribunal has given death sentence to Saidee, an infamous Razakar (collaborator force of Pakistani military in East Bengal—Sarbaharapath) of 1971. It agitated the party of Saidee, the Jamat-e-Islami and its student wing the Islami Chatra Shibir. About seventy people died and many injured in their last several days’ violence. They set buses with passengers afire, killed patient by setting ambulance afire, burned many wagons of train, vandalized houses and temples of minority Hindu community. Most of the slain are the poor and backward people, who were instigated and cheated by Jamat-Shibir. Most of the people in border are Muslim who migrated mostly from India during the partition of India as a result of communal contradiction while the rest in the border are the Rohinga Muslim people in Cox’s Bazar and Bandarbands migrated from Myanmar because of religious oppression there. In these areas, since long Jamat has been carrying organizational work and propaganda of feudal, religionist backward idea on the basis of Islamism. On the other side, in most of the areas of Bangladesh, the only education that exists among people is religious superstition. Science and enlightment is alien to them. In such ignorant darkness of some areas, the Islamist Jamat used computer technology to superimpose image of Saidee on Moon and showed Public declaring that Saidee has been seen in moon. The Islamists cheated backward men and women, instigated them to move to ‘Jihad’. Number of these innocent men and women’s ‘Jihad’ ended up having lost their lives. Though the urban middle class got in touch of modern science and enlightened a little bit, most of the areas of Bangladesh are in dark middle age.

And this is the reality.

Children are forced to believe in religious superstition; made terrified by ghosts, evil spirit, super naturalism and after death spiritual life. For poor people, it is easy and natural to believe that, because their material world is not that much fruitful, while that of rich are full of profit and greed. Even then, they are not satisfied.

BNP joined the violence of Jamat-Shibir by tailing behind them. They came to catch fish out of dirty water.

Awami League, BNP, Jamat and JP are the main parties of ruling class. They have captured the capital and possessions of Bangladesh. As Awami League is in power, it is having the major portion of profit; JP and revisionist Lefts are with it.

They have annulled the care taker government system so that the opposition to Awami League may not win the election.

Jamat-BNP, despite having no move in three years, started movement since the third year of Awami rule demanding reestablishment of care taker government system. Everything was going well. Awami League had no hope of winning election. Their possibility of winning was very less due to various reasons including price hike, peasants not having good price of rice, many times increase of price of oil, gas and electricity, corruption in Padma river bridge project, and set back in share market. In order to make split in BNP-Jamat alliance, Awami League made secret collusion with Jamat, and led war crime tribunal to give life sentence to Qader Mullah in the course of trial of infamous collaborators of Pakistani invading army of 1971. That agitated middle class young generation. They forged a movement demanding death sentence to Razakars including Qader Mullah, which forced government to correct law by keeping system of appeal. Government appealed to increase the punishment of Qader Mullah. In the mean time, Jamat-Shibir cadres brutally killed Razib Haider, a young atheist blogger who was one of the initiator of Shahbagh movement; again it agitated people all over the country including middle class young generation. And it was Friday, 22 February, when the Jamat like minded Islamist political parties infiltrated different mosque including Baitul Muqarram. After the Friday prayer, they drove the devotee to commit anti-atheist riot and violence. Apart from 5/7 Islamists killed in their violence, some innocent villagers and passer by were also killed in Police crossfire.

A few days later, when Saidee was given death sentence as verdict, since then, the Jamat-Shibir carried violence in different regions including some border areas of the country and tried to commit riot.

Shahbagh movement is centered on an issue and that is the demand of death sentence to a few wanted war criminals. Despite it is of a very much partial character, it gained people’s support. It is of partial because—

1)      The war criminals of Pakistani invading army were not put in trial as Sheikh Mujiv and Awami League was Indian lackey, they didn’t demand trial. Actually East Bengal was occupied by India, so according to Shimla Treaty, India handed over Pakistani soldiers in exchange of Kashmir.

3)      Awami government led by Sheikh Mujiv had killed hundreds of Maoist communists including Siraj Sikder, what was war crime.

4)      BNP government led by Zia had killed hundreds of rebel soldiers, what was war crime.

5)      Many people were killed in Ershad’s military rule.

6)      Two term Khaleda led BNP government and two term Hasina led Awami government with a care taker government in the mean killed hundreds of Maoist leaders, cadres and people in the name of crossfire, what was state war crime.

All these are war crime. State itself is the biggest war criminal.

In Shahbagh movement this total demand is not being raised. Needless to say, the fundamental demand of people’s life and livelihood will not be raised. Moreover, they have taken state favor. Even then, despite its partial character, we presumed that as a just demand, while in fact that will not be able to solve the basic problem. Why? Because the main problem is Hasina-Khaleda-Ershad-Golam Azam all; among them Hasina is principal because she is in power.

They, by competing each other, have penetrated religion in state and society as dominating idea.

They have made religious education compulsory and kept continuing Madrasha education. They hope they will be able to freely carry rule and exploitation if they are able to confine people backward. We hate the heinous activities of Jamat-Shibir started in the name of religion. At the same time, we express hatred against the activities of BNP as its tail. They want to go to power by capitalizing ignorance and superstition on the basis of religion. In the name of Islam, they want to sustain feudalist production relation, and also semi colonial domination of Saudi Arabia, India and different imperialist countries.

Jamat-BNP, through anti people general strike and devastation have made public life horrible. When already people are distracted by the Awami government’s exploitation, repression and suppression, the new oppression made people exhausted. People are in serious security risk due to the incidents like setting buses and trains afire with passengers, firing and explosion in roads. Life and property of minority people are under attack.

The bourgeoisie and feudal political parties are doing this from their greed for power.

And the people are the one who elect them by voting. Better to say, they are forced to vote. Except a handful of elements illusioned by the political deception of exploiters, most of the people go to vote under direct or indirect pressure of higher and middle class. They force people to dance according to their tunes. This is called slavery. Eighty percent of the peasantry that are the majority of people is landless and poor who don’t have food and work facilities. Peasants are losing inclination to agro production because of not having minimum good price of rice and excessive production cost. The minimum wage of a worker is one third of what he needs to survive. And majority of the middle class are suffering insecurity of uncertainty of average life leading.

This situation must change. Change of one party of the ruling class by another, government emergency or martial law by the military bureaucratism of that class will not make any fundamental change. The given state influenced religious based backward education results Islamist blindness.

Without revolutionary transformation of society, it is not possible to solve the problem of survival of man. Martyr comrade Siraj Sikder had initiated such a revolution with the ideology of Marxism-Leninism-Maoism. This struggle is to establish a communist society where there will be no exploitation of man by man. The newly formed CPMLM wants to reach people that very message. Formed led by new generation communists, this party should be developed and the party will lead people in struggle for new democracy, socialism and communism.