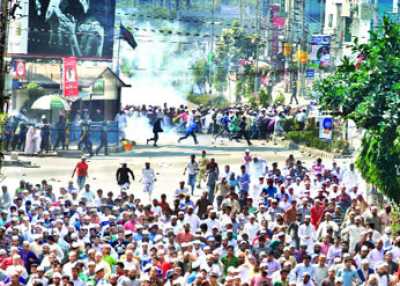 The Islamists are agitated. They are demanding punishment of the bloggers who initiated the Shahbagh movement. Their charge is that the Bloggers are atheist and they have blasphemed against Mohammad, the founder of Islam. Needless to say, with government influence, the Shahbagh protesters dispersed from shahbagh last Thursday. And it was Friday, when the Islamist political parties infiltrated different mosque including Baitul Muqarram. After the Friday prayer, they drove the devotee to commit anti-atheist riot. All over the country, those Islamists attacked upon Martyrs’ Column and People’s Uprising Munch, even they ragged national flag of Bangladesh state. Most of the participants of the riot are Madrasha student. As a reaction of that, Shahbagh protesters returned to Shahbagh again. BNP declared their support to the general strike called on last Sunday by the Islamists. Apart from 5/7 Islamists killed in their violence of several days, some innocent villagers and passer by were also killed in Police crossfire.

The question is now:

1)     By whom Shahbagh Movement is being controlled now?

Despite the educated middle class bloggers initiated the movement, quickly it went under control of Awami League and revisionist Leftists. In the public gathering in Rangamati, Sheikh Hasian threatened the atheists by saying that those who blaspheme against Mohammad will not be tolerated. At the same time, she threatened the islamists too.  Hasina said in parliament that not religious politics but only Jamat-e-Islami will be banned. In fact, Friday riot and Sunday general strike was operated by Jamat-like-minded Islamist parties, not by Jamat. But everybody believes that Jamat led that. There are many Islamist parties in Bangladesh apart from Jamat, who are not different than Jamat in character.

BNP is always ganged up with the Islamist parties. Not only they are giving support to Islamists, but they are participating in their activities too.

Now many are saying that Islam is a religion of peace, we are not against that and Islamists are the one who are against genuine Islam. It seems that there is no democratic spirit in such a claim. Modern democratic society emerged by overthrowing the domination of religion as an institution in state and society. Always religion is being used as a tool of exploitation which the capitalist society kept continuing. Imperialism, the last phase of capitalism, has made maximum use of religion by channelizing war to redistribute the world among them. The Afghanistan comrades showed that Talibans have no relation to the history and heritage of Afghanistan. They had established colony of Pakistan there. On the other side, the US puppet Hamid Karjai government too, don’t allow to translate Quran in Persian language. They think Arabic is the only language of Allah. Like Bangladesh, religious education has been made compulsory there. In the world, primitive society was a communist society. Exploitation had not emerged. Religion did not exist. As the religion-ists claim, religion is more than believing in a God or the supreme sprit, what is that? They don’t think religion is a matter of faith, rather a guiding system of society. In order to show them as chosen by God, Kings and monarchs used to impose religion over people so that they may not dare to rebel.  In Bangladesh, people repeatedly changed religion, had moved to different types of idealist trends one after another like Buddhism, Jainism, Baishnavism, Sufi-ism, Satya etc to liberate themselves from caste system and Sharia. But they could not free themselves from exploitation. Rather, imperialism, colonialism, feudalism and capitalism enslaved people in chain. It is philosophical materialism what showed the path of liberation from that. This philosophy that apply the method of dialectics has made proletariat, the advance class of mankind, able to make scientific analysis of nature, society and thought, discovering law of that and marching ahead towards communism through the path of inevitable rebellion and revolution. Ghosts or spirits of Islamists or Hinduists do not make change anything. But the conscious people transform society, in which leadership is the proletarian class, surely not middle class. Middle class is vacillating class that waver between on the one hand capitalists and feudalists and on the other hand people. Except revolutionary period, most of the times they surrender to the exploiters. Those radicals who still persist in Shahbagh movement must realize this fact. This is a serious lesson, how the movement went under exploiters’ control.

It is not difficult to expose the cover of apologists of Islamism. For that it is essential to know the Marxist philosophy, the dialectical materialism.